Never had an airport got me into tight knots like Kuwait City International Airport (KWI). It has been a while where I had felt challenged while traveling to a new place.  In a good way.

Nonetheless, I wish I had found Jon’s post on his blog The Wanderlusty  prior to arriving at KWI.  Reading it after the event, many things did fall into place.  A few details have changed though his tips are still right on. I hope he does not mind, that I did an update here.

First, Coffee Bean and Chili’s have been replaced by Starbucks and Shake Shack! 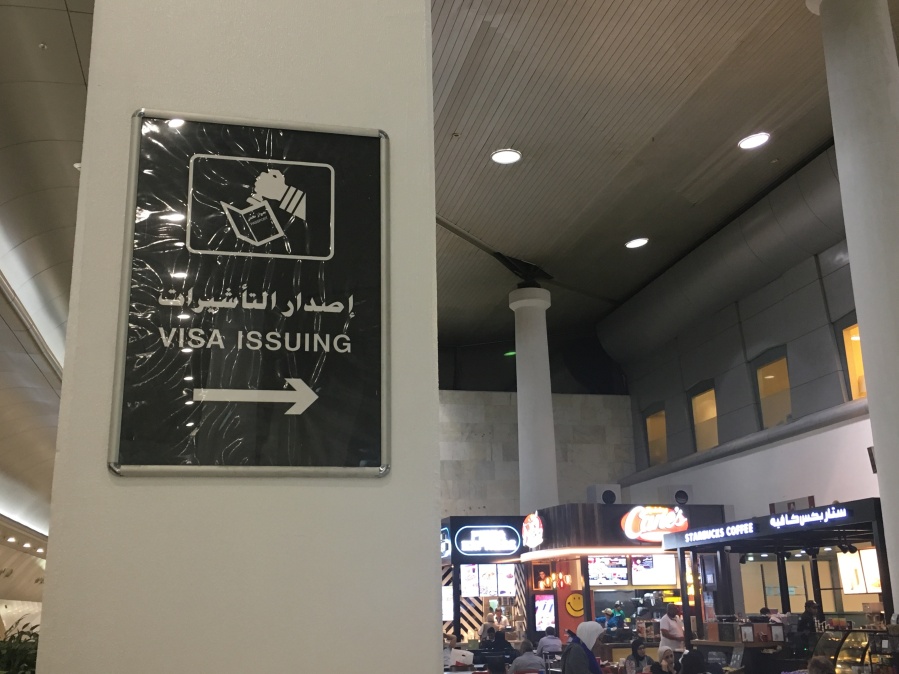 Second, the citizens of countries eligible of Visa on Arrival (VOA) can now apply online to make their life much easier upon arrival (more details later).

Third, the stamp is now sold in a machine with touch screen and the stamp is barcode lookalike.  An exact change of 3 Kuwaiti Dinars (KWD) is needed. For the unprepared, there is NBK bank counter next door to smooth the process. 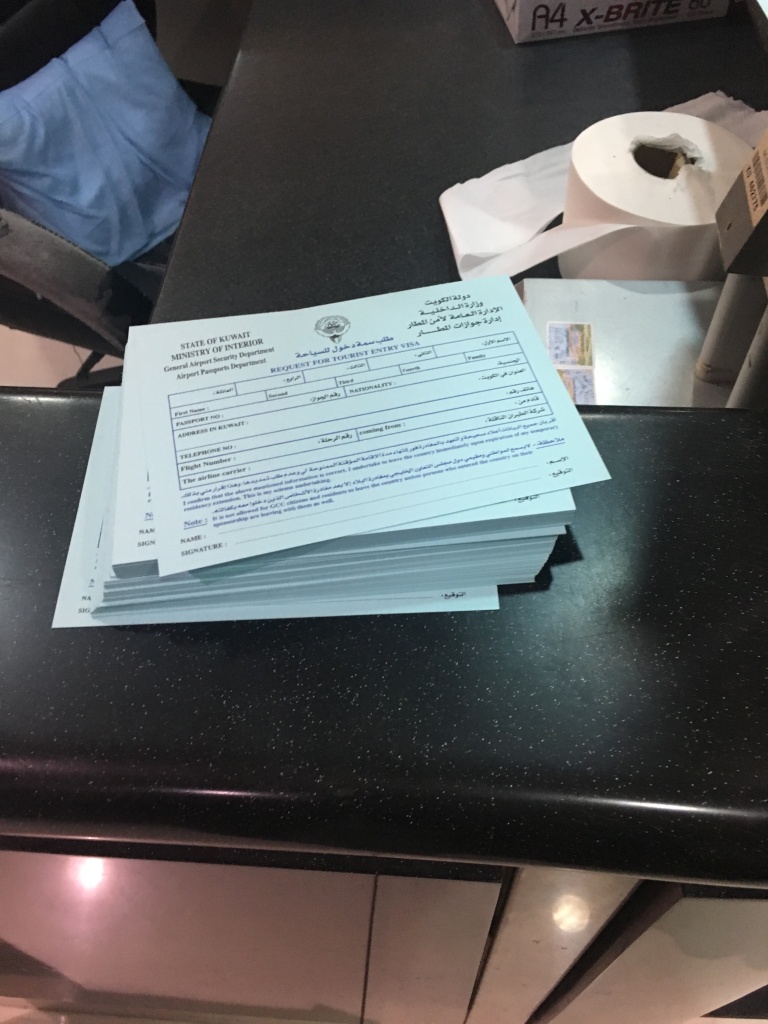 Fifth, the number taking machine now has three buttons, but the eVisa button is not useful for those who applied and got the eVisa approved.  When I got there I picked that button first and got number 520.  I saw the 519 laid beside the machine unused and the counters were only calling numbers in the 400-series for Visa button.  If you are reading this, the GCC button probably would not apply to you.

Sixth, all prepaid sim cards now costs at least KWD5 with a gazillion GBs!  Ok, I am exaggerating.  It comes with 10GB so it was not worth it for me to get one for one day in Kuwait.  (Note: if you plan to stay in Kuwait longer, invest in one! It will make your life easier to translate and get directions, etc).

Last, even after getting the visa issued, I had to go through Passport Control and got my right index finger print taken.

Now then, after reading Jon’s post and the above changes, I hope you have a general idea of the process.  I would go through below my own experience with the eVisa to get into more details.

My Own Pleasant Experience (Not Being Sarcastic Here)

I felt oh-so smart and accomplished getting the eVisa.  The instruction on the paper was very few.  “Print the email and give it to the eVisa staff”.  I assumed this eVisa is the real deal.  I thought I could just go directly to Passport Control. I was wrong!

First of all, KWI airport is very poor in signboards.  I pretty much followed the crowd after leaving the plane. By the time we got to the stairs to go down to Arrivals and Baggage Claims, I was not paying attention to the sign further ahead stating “Visa Issuing”. 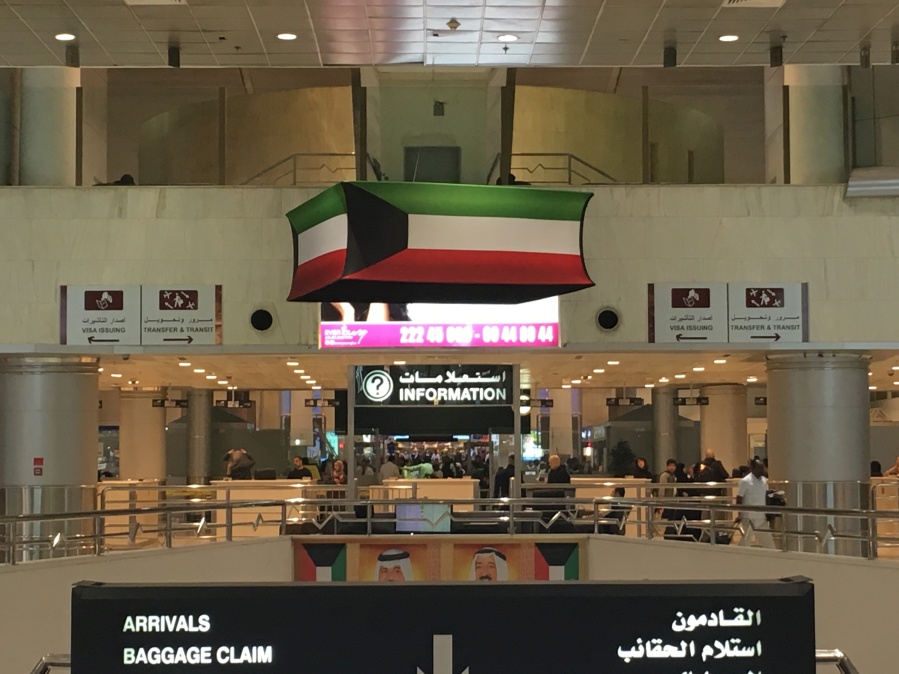 I went down instead and queued at the Passport Control – only to be told by the Immigration officer to go to Visa Issue section, with no direction except a hand pointing to a general direction. Another guy had to explain to me that it was upstairs. “Take the lift, press 1, exit lift to the left twice, and the counter is behind Starbucks!” 🙂

I immediately rushed there. I took two numbers for Visa and eVisa. (There was no officer we could ask. They were all busy with someone at the counter).  On the visa number, I was the 22nd person on queue.  I filled in the blue card.  I tried to make photocopy of passport but the machine was broken by two-someone ahead of me. Always have extra passport copies with you! 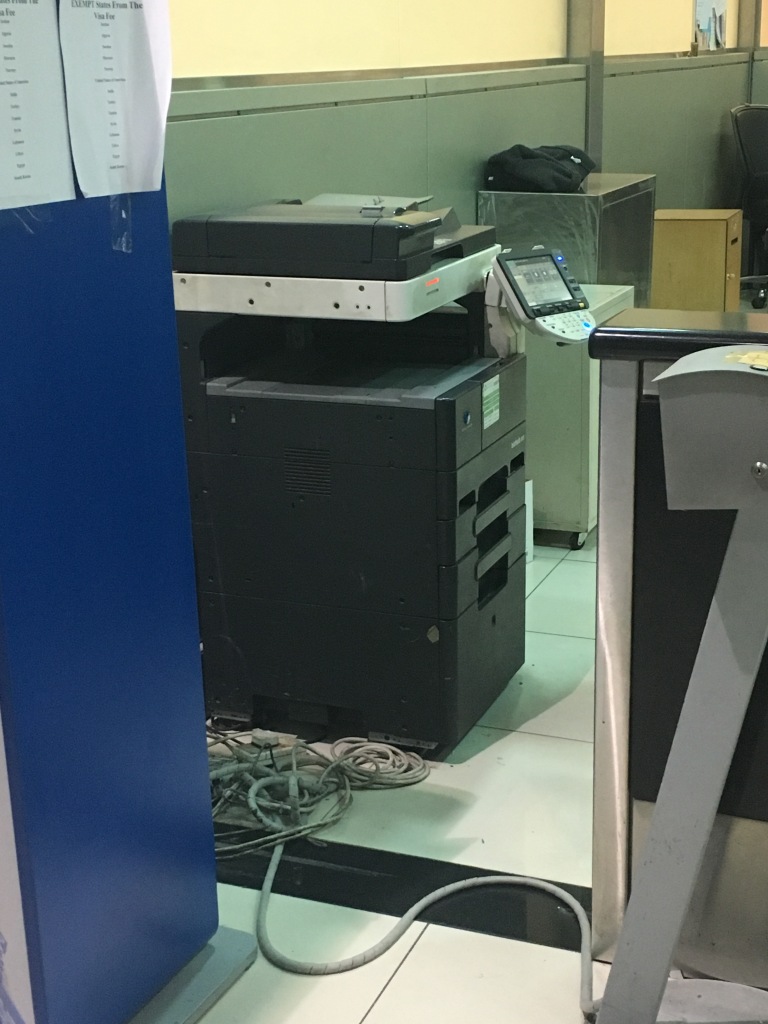 After I did all that, I asked two other guys (who luckily speak English), but they also were not sure what was going on.

So, by chance, I went up to the lady at the end of the counter and showed them the printout of my eVisa. She immediately took the paper and asked for my passport to process it before calling the next number. She then asked me about the KWD3 stamp, and I was clueless, so she patiently told me to go to the machine to get the stamp.  The machine took only exact change. I had to run to Starbucks to break my KWD10.  After a few short tense minutes, I got the stamp and went back to the lady. The VOA was already ready. She was good! She pasted the stamp on the back of the VOA and voilà!

That was how one cut 22 people ahead in the queue! By getting the eVisa!

I assumed without the eVisa the procedure remains as described by Jon. His tips are right on, especially on getting a number before bathroom!!  You never know which flight is arriving right after yours.

I hope this post help getting your visit to Kuwait on a right footing.

15 thoughts on “Navigating Visa on Arrival in Kuwait”