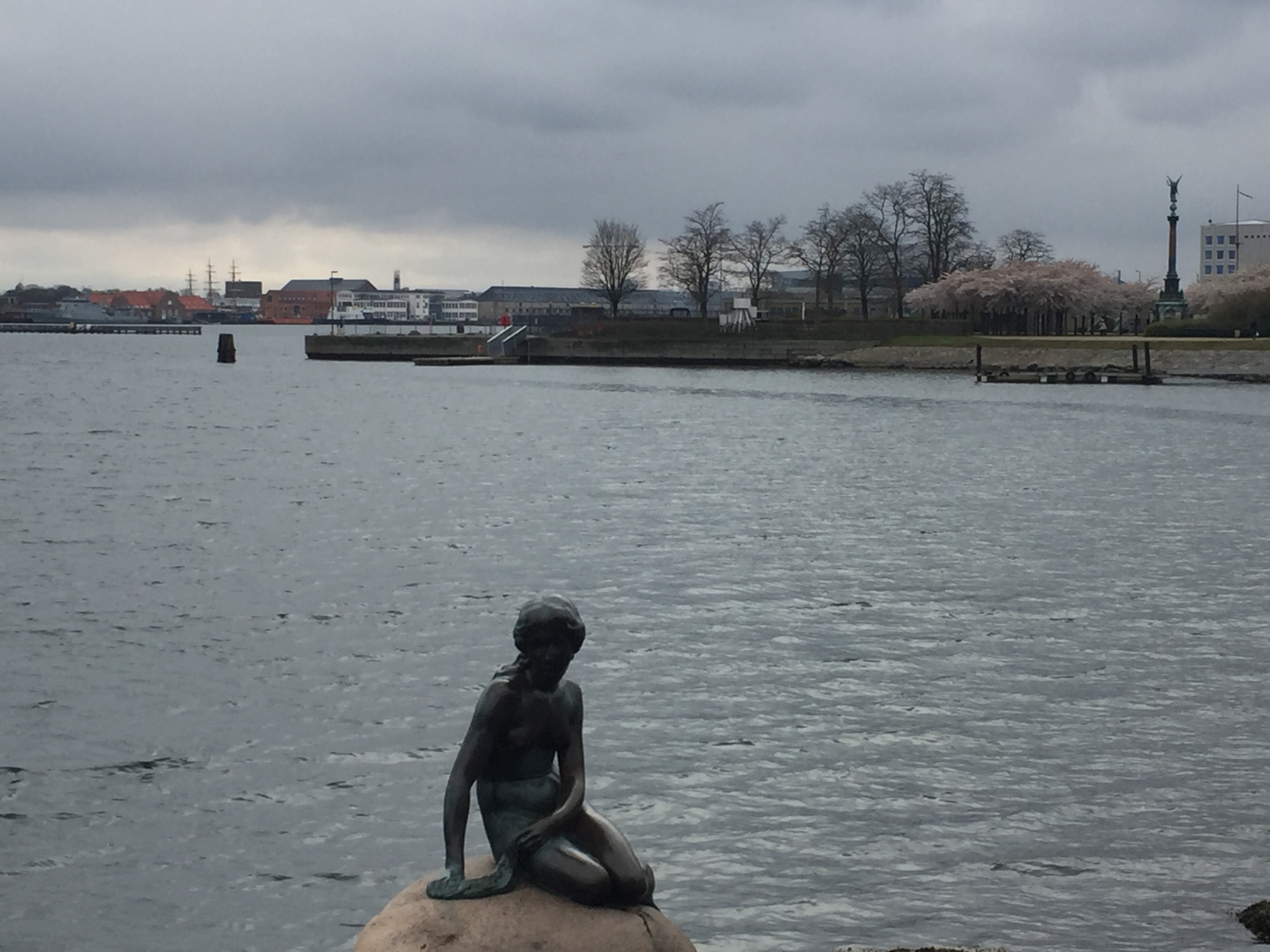 I stopped by Copenhagen on the way back from Greenland and Iceland.  I was not planning a full-on assault on the city, but just a few days to re-adapt to the modern society before plunging back into the concrete jungle called Singapore.  In my three days and three nights there, it seems I was anywhere but in Copenhagen!  I spent a day in Roskilde for  and half a day in Malmö.  What little time I had left, I spent it chilling in Copenhagen.  No museums, no churches, no guidebooks….

I did not bother to buy or read any guides on Copenhagen.  I only looked for the basic info, such as which area to stay (I chose near the Central Station so that it is easy to go out of town) and how to get to town from Kastrup airport.  When people asked for my plans and I mentioned Copenhagen, they all told me the same thing: rent a bike!  And of course, I know of the shopping street, Strøget and the Little Mermaid (picture above).  The rest of the plans were up in the air to be whimsically made and changed at anytime.  This trip, humongous internet data plan (20GB from Lebara for about EUR20 including the Sim card) and tripadvisor.com saved my backside many times in my quest to do Copenhagen the “lazy” way.  Lately, I have to read so much for work, I have stopped reading all the fun travel magazine and guidebooks.  Googling everything seems to work these days – most of the time.  Talking to fellow travelers never fails to yield interesting tips that can get one into “fun” troubles (how I ended up in Christiana).  Now that Noma is closed, I just went online to find other delicious alternatives to spend my evenings.

Because I am not used to cycling on the roads, I decided to join a biking tour instead.  One, I would not have to worry about directions and thus, can focus on the surroundings. Two, I got to see the major sites, without having to read anything.  Three, there should be safety in numbers against the cars, right?  I decided to join Christian of Cycling Copenhagen. There was only three guests, plus Christian and his assistant (who is training to be a guide –  I am sorry I forgot her name). So it was a nice size group to start and stop and to chat.  We started in Westend (which is modeled after Westend in London).   Then we went to the meatpacking district, which is not full of hip restaurants.  They modeled the rejuvenation of the meatpacking district after its namesake in New York City. Then we cycled across town to the New Harbour (Nyhavn). I love Europe for its long and rich history and traditions. This so-called New Harbour is about 500 years old.

We then cycled North towards the Amalienborg, where the current Royal family lives and where the embassies are located until we reached the famous “Little Mermaid”. It was a nice cycle and it was beautiful under the cherry blossoms. However, I fail to appreciate the greatness of this statue that has lead to its popularity.  And to think, I almost walked an hour here the day before??

Then we continued on to the King’s Garden where Rosenborg Castle is located. This is Denmark’s Neuschwanstein Castle. The King’s Garden has two avenues of big lime trees which intersect one another.  Apparently all television or movie scenes featuring lovers walking down the park are most of the time shot here.  We did not see anything going on the day we were there.

Our tour was ending passing two very important institutions, to which I went back after the end of the cycling tour.  One is the Sankt Peders Bageri (the best bakery in Copenhagen I was told), whose Wednesday’s special was cinnamon bun roll with icing or sugar topping (which would be sold out by 2-3 pm). I had to try of course!  Verdict:  Delicious, but I think the Americans do much more sinful sticky cinnamon buns.

The second stop is the Round Tower (also built by Christian the Fourth) or Rundetårn as it is known in Danish.  The hollow core of this tower is the starting point where all distances in Denmark were measured (the so-called point zero).  Of course, I had to stop and take photo standing on this point (on a glass floor).  Then I went all the way up (after being distracted by the old privy, the library, and the bell tower exhibition) to see 360 degree view of Copenhagen.  It was a cloudy day unfortunately.  On a clear day, they can see Øresund bridge all the way to Sweden.

On my half free day, I decided to stroll around Copenhagen.  A guest I bumped into at the hotel shared with me his Christiania experience.  I got curious. So I walked to Christianhavn (aka Christian Harbour) which looks like Amsterdam – thanks to the Dutch architect that Christian the Fourth favored so much.  Christiania is nestled in the heart of Christianhavn, and a couple block from it, lie the most expensive condos in Copenhagen and where Noma restaurant used to be.  Christiania is a self-proclaimed “city” area.  I was happily snapping photos (including below – I decided to post it because there is no person in this photo – if not, I would have respected his/her privacy). I honestly thought this sign was a joke. Until I saw another female tourists snapping photos and a guys told her to stop. By this point, we were entering the commercial “horticultural” area 🙂  I almost fainted from all the smell. Since my school days overseas, I was exposed to this horticultural product and somehow was always turned off by it.  So I was not trying to be judgemental. It was just my preference. I saw, I smelled, and I left…in a hurry.

Strolling the Strøget shopping street is more my speed. I did not buy much in Copenhagen, but it was still nice to walk and looked around. I only entered the Danish shops. I spent sometime in a household shop called Plint. It was an interesting shops with a mixed of functional and decorative household stuffs.  I love to travel, but it is always nice to know you have somewhere or someone to come home to.  I strolled around until it was time for dinner.  I walked and walked til my feet dropped (felt like it anyway).

I do not always eat at fancy restaurants, but it does fill up my evenings when I do that.  I enjoy street foods as much as fine dining foods, both eating and writing them.

Since Noma restaurant was picked as the “best” restaurant in the last few years, Denmark and its Scandinavian neighbors suddenly received a breath of fresh air to create and recreate under the watchful eyes of the foodie world.  Noma was already closed (and even if they were not, with my lack planning, hardly I would get a table on such a short notice).  So of course my fingers had to click through the web for other yummy options. I settled on two: Restaurant Leaven and Restaurant Kokkeriet.  I chose the latter because on Wednesdays, they serve dishes created by their apprentice young chefs for us to try, if we are open-minded enough.  The apprentice chef’s name on the Wednesday that I went is Mattias. I honestly enjoyed his dished and would not have noticed that it was a so-called “student” dishes. Restaurant Leaven was chosen just by instinct and its nearby location (what a great instinct I had that night!).  A sample of the edible work of art of the chefs are below.

I definitely ate very well on both nights.  I am amazed at the creative ideas of the chefs.  I love to have local ingredients in all my food. And I love to see classic foods being recreated to something unexpected. I think most foodie started with the classic french food and slowly expanded to other cuisines (as those cuisines also progressively develop their styles).  What I love the most is when they take local ingredients (uncommon to the world) and incorporate them into their dishes.  I have seen this in Latin America and they have done this very successfully.  The two times I ate ants were at fine dining restaurant: Dom in São Paolo and Leo Cocina y Cava in Bogota.  I think Restaurant Leaven and Restaurant Kokkeriet have also successfully incorporated the local herbs and plants into their food, such as sorrels and salsify.

Until so long Copenhagen. You have kept me satisfied, but I am definitely not done with you yet.