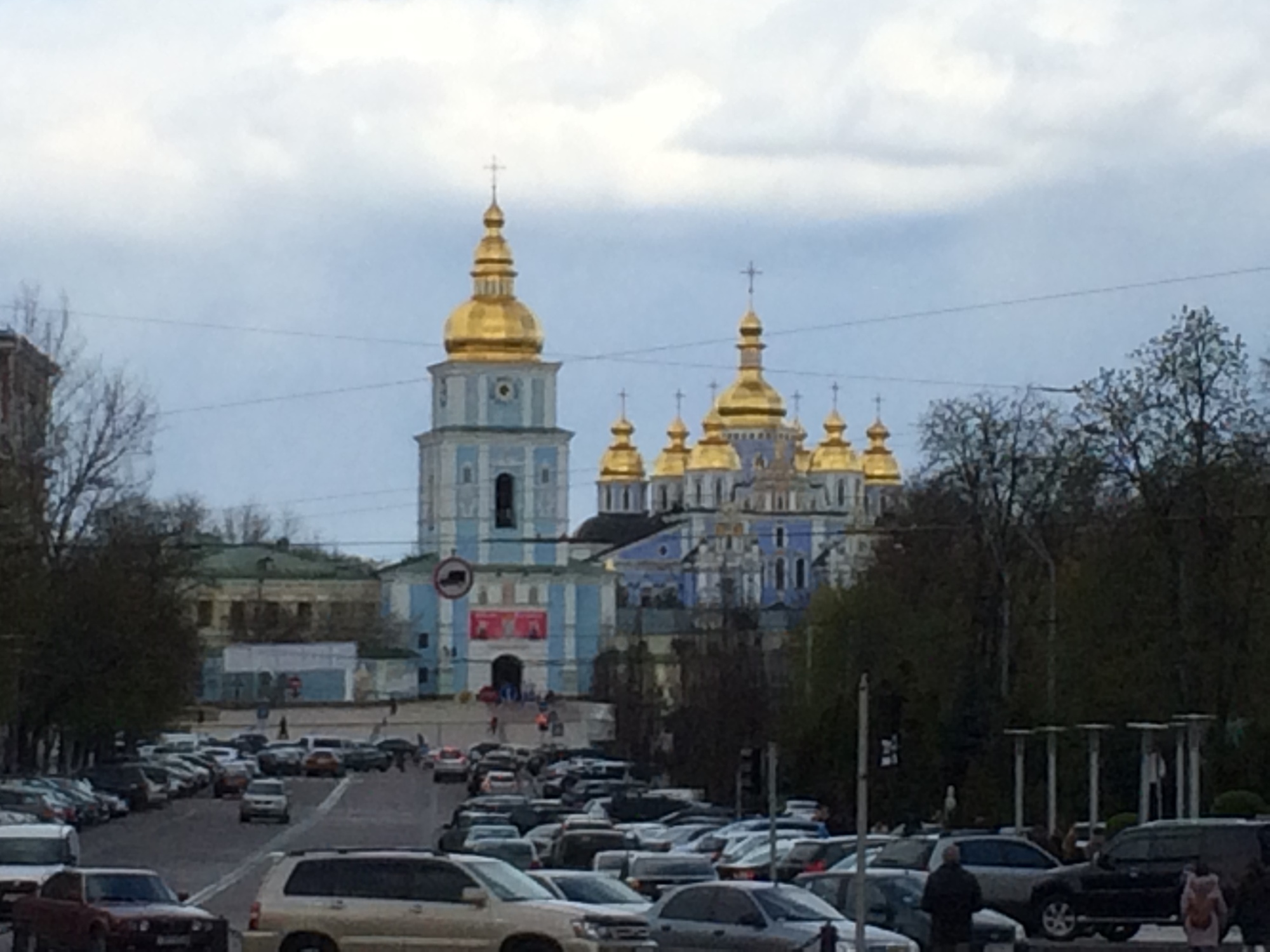 My motto is to spend time and money visiting new places and countries before going back to the same old places regardless how good they are.  Life, most of the time it seems, has other plans! I am now back in Kiev for the fourth (or fifth??) time and counting!

I always find Kiev an interesting place to visit and every visit I am learning more about the city (sometimes good, sometimes bad).  I have come to the point where I am very comfortable walking around the central of Kiev (areas such as Kreschatyk Boulevard, Podil, Taras Schevchenko Boulevard, the Opera House and so on). I have also discovered my favourite places to eat (Spotykach and Tsarskoye Selo – Ukrainian food) and to visit (the Lavra Underground Monastery). On my last recent visit, I did wonder what the feel of Kiev would be like given the economic and political crisis. Many people living in hardship has been a given, but what is the extent?

I learnt some hard lessons from one of my trips (in late 2011). Once a restaurant called me a taxi to return to my hotel and I did not ask for the fare. The taxi driver wanted to charge me USD30, compared to USD5 that I paid on the way to the restaurant. Actually instead of paying at arrival, I ran inside and asked the receptionist to help me. At the end, I paid USD8.  I also was walking around Kreschatyk Boulevard (main shopping street) when two teenagers approached me. One was wearing a Mickey Mouse costume and the other wanted her friend to take a photo with me. After taking multiple photos, they wanted to charge me USD7 per photo! I immediately deleted the photos in front of them and walked away!

Note: Ukraine has its own currency called “hryvnia” and it has devalued from USD/HYR 7-8 in 2009 to USD/HYR 22-23 since 2014. Thus it seems easier to state the equivalent USD value for comparison.

As a result of the currency devaluation, in 2015, Ukraine has become a very cheap place to visit. The hotels are still expensive, but food, Roshen chocolate, and sightseeing have become very cheap. Transports are slightly cheaper but the fares have increased in recent years. Out of curiosity I popped into McDonald’s to check out the prices. Big Mac value meal costs USD2.50 and capuccino at McCafe costs USD1.50. Is this the cheapest McD on Earth???

Staying at 11 Mirrors (amazing location a block from Opera House and two blocks from Kreschatyk Boulevard) set me back a decent amount (wifi and breakfast included). The hotel is a member of Design Hotels network. It is swanky, modern, and still looks super new. It was constructed for the UEFA Cup of 2012 hosted by Ukraine and a couple other Belarusian countries. And a room upgrade did not hurt of course. A stay at Intercontinental or Grand Hyatt would have set one back double of what I paid at 11 Mirrors per night (about 10-15 minutes walk away – both located in great locations also though I prefer the location of 11 Mirrors). The hotel rates are definitely comparable to Metropolitan cities in more developed countries! It is very unaffordable for local tourists, who usually just book apartments for a fraction of the price. Being a lone female traveler though, I prefer proper hotels for safety reasons.

A limo service from the airport costs below USD40 and a taxi ride costs USD15-17 to the airport. Both driven by corteous drivers and good cars. The trip takes about 30-40minutes on average, though bad traffic in the centre can double the trip time.  Traffic is very bad now in Central Kiev in the afternoon. It is nowhere near as bad as Jakarta of course!  The fare adjusted up in recent years, unlike food prices, but they are still affordable.

Kiev is really a beautiful city.  I love the renaissance-style buildings there. Some are quite run down, but you can still see their hidden beauty.

I went to a quirky, fancy, and popular restaurant called “Kanapa”. It serves modern Ukrainian cuisine with molecular tidbits. The borscht soup is served on a huge cabbage! Yum! One of the dish is served with sour cream shaped into long tubes.  The sauce in the beef dish is presented in a molecular ball. The tasting menu set me back USD19.50. I skipped the wine, but looking at the price, European wine per glass was listed for USD4 approximately. This restaurant is located in the Andrivskiy descent – a cobbledstone street with a wonderful Orthodox Christian church (St. Andrew’s Church)  and souvenir sellers.

I also went to a Ukrainian restaurant called O’Panas where a meat dish costs about USD4 and a small beer USD1.50. Value for money! I tried a new dish here which is corn polenta with meat. Mamalyga is the local name, and it is actually more of a traditional dish in Romania, and therefore its influence is seen more in Western Ukraine. I also have to order Borscht soup in every Ukrainian restaurant I go too! If tiramisu is the standard to judge all italian restaurants, borscht soup is the standard to judge all Ukrainian and Russian restaurants!  The Borscht is not bad here, but I have had better. The accompanying bread, pampushkiy (usually eaten with garlic dip), has meat fillings inside – usually it is done plain in other places.  I also tried a local beer here, Lievskaya. For better Ukrainian food, try Spotykach or Tsarskoye Selo. Spotykach is a new restaurant with Soviet-era theme. I like the borscht and varenikiy (dumplings) there. Tsarskoye Selo is closed to the Larva monastery (taxi needed), but it has a great Ukrainian village ambience and the food is very good. This is a great for first-time visitors.

In my early years of being a foodie and trying out new cuisines, French cuisine was the epitome of fine dining. French food is gourmet and top of the line. This perception has evolved of course. Now any cuisine can be fine dining. Whether it is worth it or not is a different story.  But I digress. For the ex-USSR countries, such as Ukraine, Georgian cuisine is the “it” cuisine. If it is Georgian, it is delicious and it is gourmet.  They serve special guests Georgian cognac over Ukrainian vodka. Georgian cheeses and fruits are better too.  And being a curious cat, of course I had to try Georgian food while I was in Ukraine. The hotel concierge recommended Khinkali (traditional Georgian decor and atmosphere) and Shoty (modern, upscale and quiet but beautifully done). Since I received a lunch invitation and I could choose Georgian food, my local contact seconded these recommendations by taking me to Shoty (written шоти in cyrilic). It is one of the best food I had ever eaten. It was simple and delicious and satifying. The wine was beautiful and served on a clay jug. The khinkali (meat dumpling with broth inside – similar to chinese “xiao long bao” albeit with thicker skin) was to die for. I cannot get enough of the kachapuri (bread boat with two types of cheeses and egg and butter). The walnut dip to accompany the shoty bread (boat shaped bread). The restaurant is named after this bread. The lamb shashlik with pomegranate melts in your mouth! The panfried chick is tasty and perfectly cooked (chicken tabaka). I was so full and satisfied after this meal that I did not eat again until the following day’s lunch! My mouth waters just writing and remembering this meal.  What an experience!

Roshen chocolate is always a fave. Thanks to devaluation, A box of liquer filled chocolate costs USD2.50. Roshen owner/confectionary billionaire is now the Ukraine president. So hopefully having someone who is business savvy will lead the country to an economic progress.  During my first trip in 2009, I tried a few of Roshen products which are sold by the kilos in supermarkets. Since then I am hooked and I bought a bag load of various assortments for the people back home. It costs about USD1 or less for 100 gram.

A new trend that I noticed in my last trip is the coffee trucks all over Kiev. The prices are very affordable (less than USD1 and half of the coffee chains like Coffee House and Coffee Time). They are always busy with people. And what a good business idea for those with entrepreneurial spirits with no good employment opportunities. The startup cost is low and the margin is probably good.

The following paragraph may be insulting for some people and it is a very judgmental personal view. People in this part of the world does not smile to acknowledge strangers on the street, but the moment they know you, they are one of the most hospitable and generous bunch.  After dealing with Ukraine for six years, some things remain the same.
The women I deal with are always decked up to the 9’s and fake. They kiss ass and flirt a lot to get business.  This fact is confirmed by a fellow male colleague on the receiving end. One positive progress that I have noticed is that there are fewer guys getting into business wanting to make a quick buck and run.  Not saying that they are not crazy about material world (if Marni and Chanel boutiques and countless Range Rovers and Mercedes can be a good indication), but they think far and long term.

Despite the obsession with making money and getting ahead, the people seems to be very religious. A visit to the Kiev Pechersk Lavra monastery (underground monastery with relic of saints in the caves) and a visit to the Saint Vladimir’s Cathedral shows the devotion of many. Although I am not Christian (Orthodox or otherwise), the Lavra is one of my favorite places on Earth. I have gone there three times, and I would return again. I always feel a sense of peace going there.  Orthodox Christianity is an interesting religion. Women must wear scarves and remove all lipstick going into the caves in Lavra. I love all the churches I visit. The churches are spectacular (inside and out). And yet, there is no issue with girls selling their bodies to have a good life.  There is a famous strip club three minutes walk from the St. Vladimir’s Cathedral. When it comes to pragmatism and religion, I guess the answer can be easy.

Due to political unrests with Russia, real estate investment in Ukraine is a losing proposition. Young people prefers to rent, but they cannot afford paying high rent. Salary is quite low.  They do not want to put their money in property in case the war breaks out. Some people seem to have one foot out the door. Though strangely, I still see development projects (luxury condominiums) being started, or perhaps they have been postponed. It is hard to tell.One positive development from the 2014 unrest, more laypeople refuses to condone corruption and bribery. They are aware that it also starts with each person.  This awareness is wonderful and a step in the right direction. Even the traffic police now is scared to ask for bribes, and the people being pulled over no longer thinks an extra USD10 can save them the hassle.

Ukraine is one complicated country. It is longing to shed its USSR past and join the EU. However, if I were the EU, with Ukraine messy politics and economy and an outlook of large of human migration into the EU, I’d probably be dragging my feet and am not eager to welcome them with open arms soon. Although Kiev still seems bustling as before and businesses are getting done, one can tell that the socio-economic gap is not going anywhere and life will still be tough for many.