I went to two important Mayan Ruins (Tulum and Coba) today in the heat without being tired at all – I even climbed the Great Pyramid of Coba as the finale (42 metres of steep, narrow steps). Thanks to the yellow Maya Limo in the Coba ruins.

The climb was challenging on the way down. I do not know how a guy had her daughter on his shoulders and one hand holding a little boy. It is courageous on hand and reckless parenting on the other. People are known to have tumbled down these pyramids. The dangers are quite real. He must be Maya in his past life. The Mayans, it seemed would walk up these steps with ease with offerings in hand. 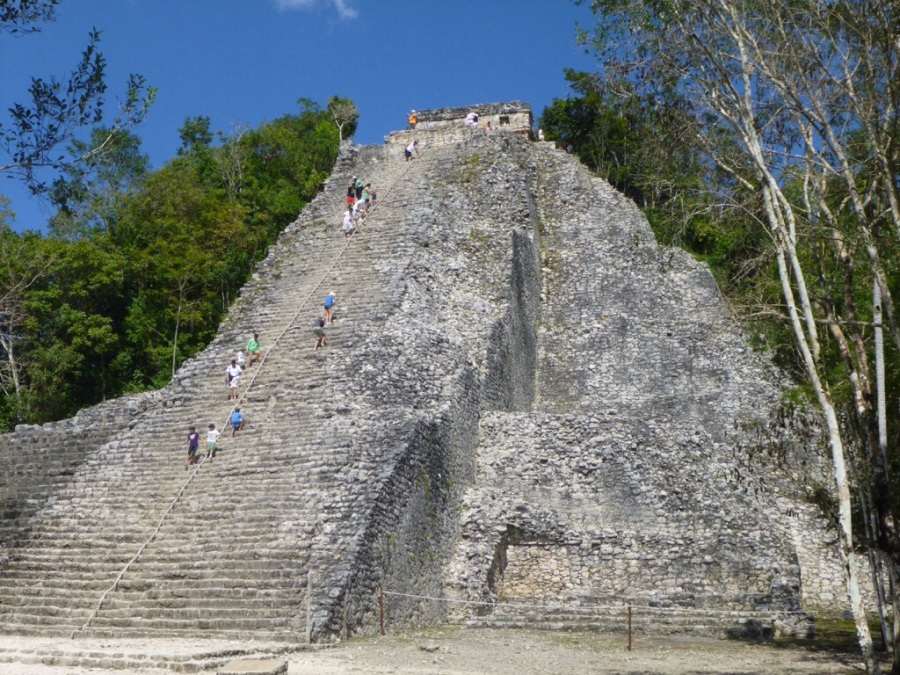 Anyways, back to my lovely limo. For mxp190, I was chauffered around with natural air conditioning through all of the Complexes of Coba (each about 2km apart from each other). I am such a lucky girl today. There were very few people in Coba and I had many photo moments with no people around!! The highlights of Coba for me are the larger ‘juega de pelota’ (ball game) court, where it comes with a jacuzzi (for purification and not ice bath guys!) and the painted complex (where you can still see a deity figure in the original orange and blue Mayan paints). 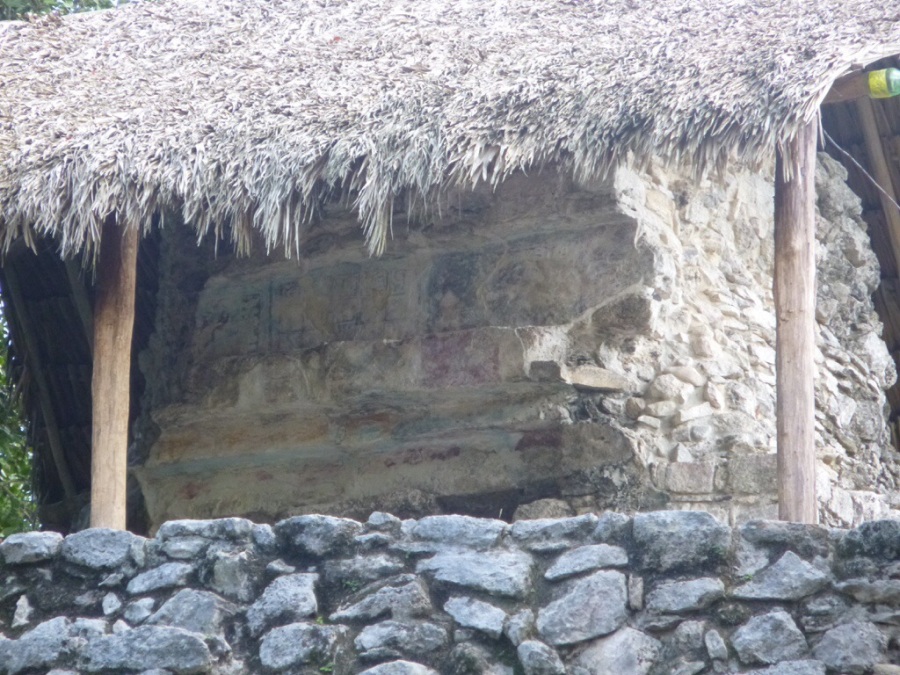 The best however, is the Coba immigration (aka the Xaibe Palace). The building below is located at a crossroad where visitors of Coba was observed and checked. The spirals of the buildings are for the guards to go around to watch all sides. 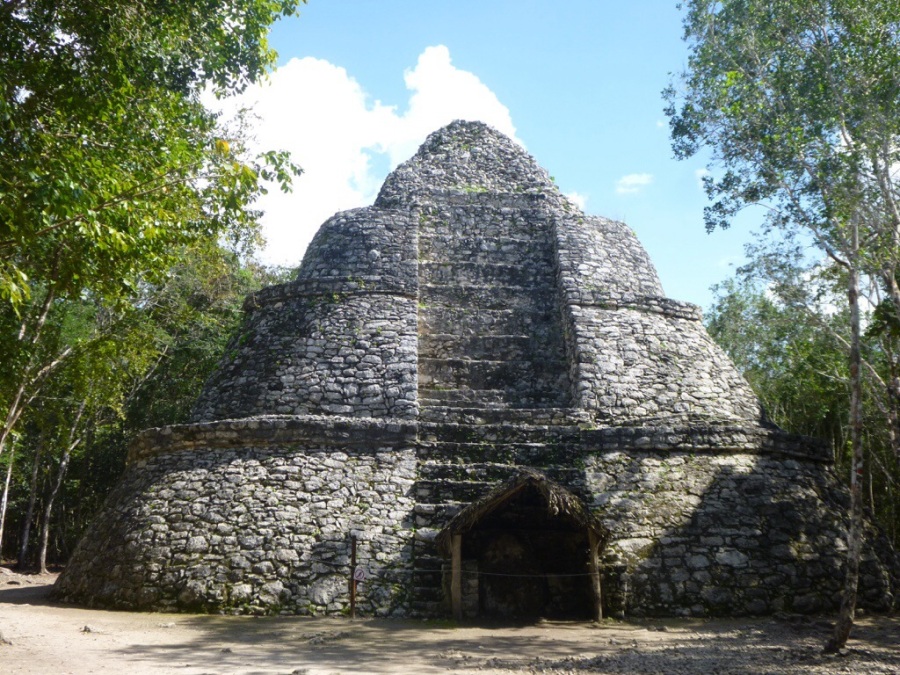 The second best is the almost 100-km Mayan highway (called sacbe) from Coba to Yaxunah, a town 12 km from Chichen Itza. It was 10m wide and it was white in color (covered with stucco I believe). It has been taken over by jungles unfortunately. 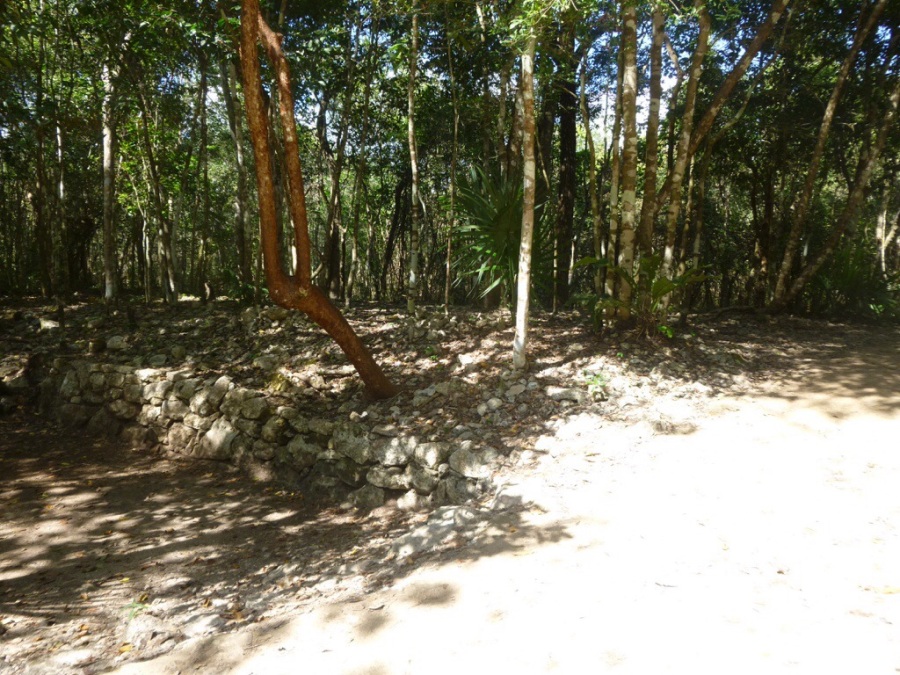 The Mayans were an intelligent and advanced society of its times. They were however the victim of their own success. On one hand, they were conscious of their ecological surroundings. They had gotten astronomies and the movement of the Sun to the T, which helped their agrarian societies. On the other hand, their blind faith to the Mayan gods seemed to give them a permission to deforest their jungles in their quest to build bigger and better temples. They did not only use the woods for the construction of houses, but also to burn limestone to make cements (producing cal). The Mayans never ceased to fascinate. There is still a lot to learn about them. All the mounds you see around the excavated ruins are treasures that are waiting to be uncovered. If you have more interests on Mayan’s astrological prowess and their mythology, check out Tales of the Maya Skies, a 3-D film on the subject (http://www.mayaskies.org).

Coba really reminded me if Tikal in Peten, Guatemala. The old cities were both taken over by jungles when they were abandoned, and only a small percentage has been uncovered in different parts, thus, creating “complexes” within the jungles. I am not an expert but the top of the Coba pyramid is similar to Tikal. When I was at the top of the Grand Pyramids, I saw jungles and the tip of the checkpoint building, which reminded me the view from Tikal Temple 4, where one could see the top of Temple 1 and Temple 2.

On a brighter note, Tulum is also amazing in its own rights. It was a bright, hot day. And with sweat dripping down my forehead, I climbed down to the beach below the Tulum ruins. It was an amazing beach and sea with large corals which gave the Mayans protections from sea invasion. No boats can enter Tulum, except on the part that is aligned with the windows on the Temple. Lights would be shown at night through the Temple’s two windows, making it an ancient lighthouse, to guide any incoming boats. 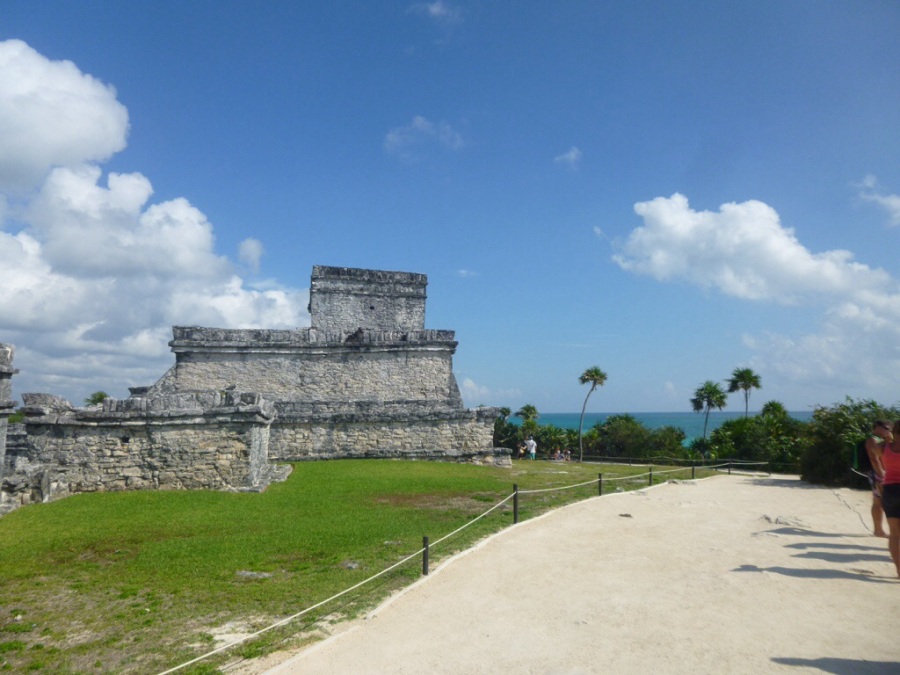 Tulum is a walled ancient city. Its walls were the reasons the archeologist called it, Tulum. Its name during its time was Zama, the city of Dawn because it faced where the sun rises. Tulum is very special due to its cliff location. A combination of hot sun, sexy Venus, and sleek beach must be a combination that is hard to resist for any tourist gullible enough to believe Cancun is Mexico (myself included) LOL. Tulum was dedicated to Venus as seen on the figure found on the main Temple and King’s Palace, and is also aligned to Cancer constellation/summer solstice. I was surprised when I admitted to myself that it did not impress me much. It was beautiful and amazing, but I did not feel the ‘connection’, the mystery. Maybe I was hungry and I was thinking of Subway (the sandwich chain) at the shop/restaurant section of Tulum’s entrance or the Starbucks we missed when we first got on the highway. NOT!! I really found this area is too touristy. I feel my Magical Maya failed to mesmerize me today. 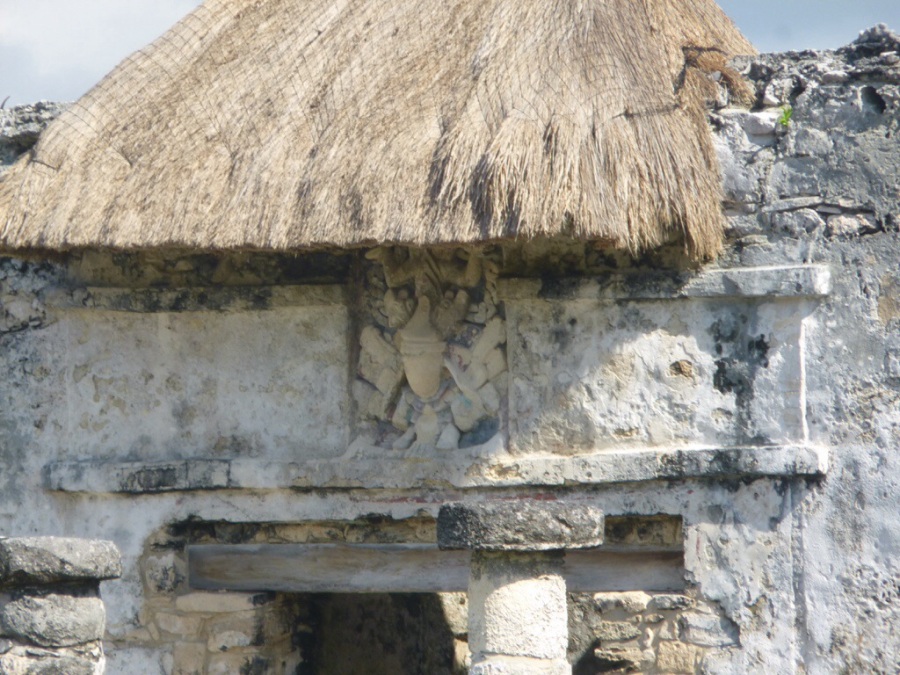 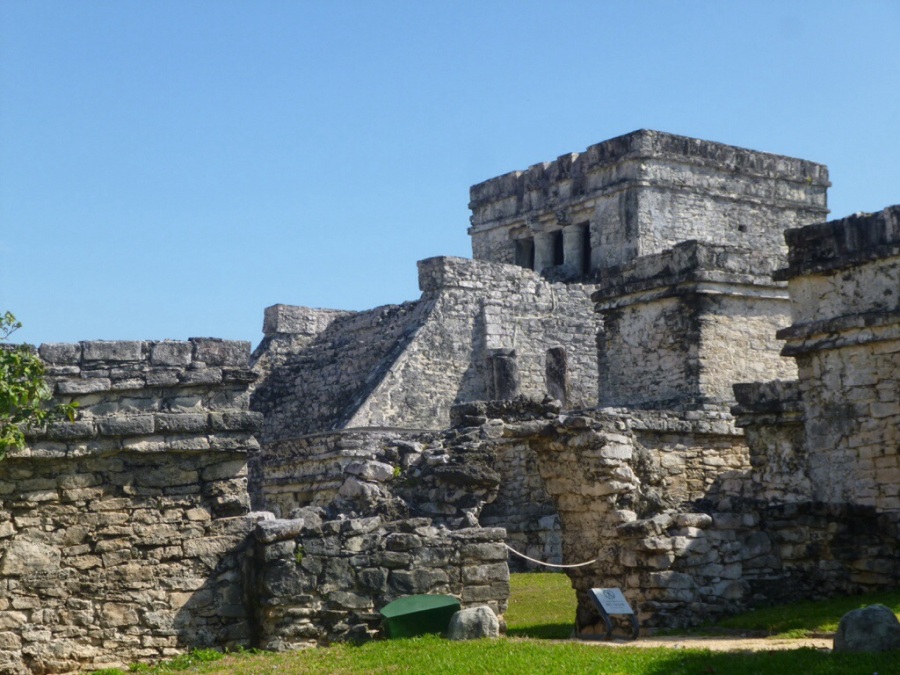 After the physical exertions, I went  to refresh in a natural cenote, one of things Yucatan is famous for. I went to cenote Multun-Ha.  I was the only swimmer and it was incredible and scary at the same time. Some parts are at least 30-40 metre deep.  Off the edge platform the depth is 17m.

The Maya Magic is back and my seventh heaven is about to change to the Mayan thirteen levels of Heaven!!!! I arrived at Mayaland hotel to find my garden-view standard room is facing the Observatory (El Caracol) of Chichen Itza!!!!