Finally, I arrived in Mexico!

My trip so FAR (1.5 days into it) has been ordinary. Yes, the blue ocean and soft white sands are amazing. So amazing that even I (who is not into oceans and beaches in general) are allocating tomorrow afternoon for some play time in the sea. (Due to Mother Nature, this plan will not materialize however!!!)

The rest, however, has its ups and downs.

The ordinary local people has been amazing. They are very helpful.
I am traveling without researching much this trip. The last time I read the guidebook was back in September 2013 before my canceled trip. My first morning here I really made my way around based on wits and the kindness of the locals. I was jetlagged and decided to roam around from 7 am in the mornin, in search of mobile sim card (see my entry on this for some tips – no need for you to learn the hard way as me). The front desk guy told me to go to Chedrahui (local low cost hypermart in Ciudad Cancun part), which is already opened. The concierge told me to go to Telcel shop which opens at 10am at either Plaza Flamingo in Zona Hotelera (ZH) or the big Mall Americas. Because of the abundance of time and needs of adventure, I decided to go Chedrahui first on a local bus. One kind man actually made sure I got on the right local bus and got off at the right stop. The bus was full of locals (I assumed just finishing their night shifts in the hotels in ZH). I felt totally safe.

In Chedrahui, I discovered that the Telcel and Movistar promoters are not there and would only come later. So I decided to get snacks and water in the supermarket. And I realized I got robbed by my hotel the night before!! Arriving at 11pm at night after a 30-hour journey, I decided to drink a large bottle of water at the hotel instead of roaming around looking for water.

See this photo – read about this special offer::

I paid mxp6 in Chedrahui for 2L bottled water! That was 10 percent of the so-called special offer! I felt so ripped off! The hotel charges for coffee in room mxp30 per sachet. There is no free bottled water. (Ps. I did not choose this hotel, I am here for work). I have traveled a lot and stayed from dingy hostels to six-star hotels, I never felt so ripped off until my stay here in Fiesta Americana Coral Beach. On a personal trip, I would have avoided ZH altogether. ZH is not Mexico. ZH is tropical Vegas strip. ZH is overpriced Nusa Dua resorts. Apart from a few hole in the wall eating places, there is nothing much here. I must be the only “tourist” walking around with a dour face. I do not even bother to try to shop for souvenirs here. Everything is very overpriced for the mass produced, low quality stuffs they are selling. And I am not in bargaining mood.

Anyhow going back to my morning adventure in Ciudad Cancun, in my daze I headed to Mall America in search of sim card after Chedrahui (forgetting that it was 8 am and nothing was opened). I asked around and took the bus again. Again I felt safe. The girl passengers smiled at me and the bus driver was polite and helpful. The Mall America really looks like a mall in the US, from the shops, the design….quite interesting. I could have been in Burlington Mall in Massachusetts or Danbury Mall in Connecticut. I supposed that is to be expected. There is a Walmart here. And ZH is full of american chain restaurant and american tourists.

Still on a mission for a sim card and time to kill, I decided to search for breakfast in Mercado 28, a craft market for tourists with eateries catering for both locals and tourists. I skipped past the restaurants and the souvenirs of course! There is no bus from the mall to the mercado. A cab ride cost me mxp25. Chatty cab driver. He is kind too. When we got there and it looks quiet, I expressed my doubt if anything is opened in the inner section. He assured me that the activities would have been starting slowly. Despite that, he told me he would make one round (the mercado covers one short block) and dropped me off at a licuado stall and taco stall first for breakfast on the other side of the market (I could have walked). Again, I did not expect such hospitality.

It was a busy morning for me. I tried chaya (Mayan healthy leafy plant)/pineapple/celery/grapefruit (you can also choose orange) juice (agua de chaya). Thanks for the recommendation, HS! It was sour and fresh.felt detoxed right away! 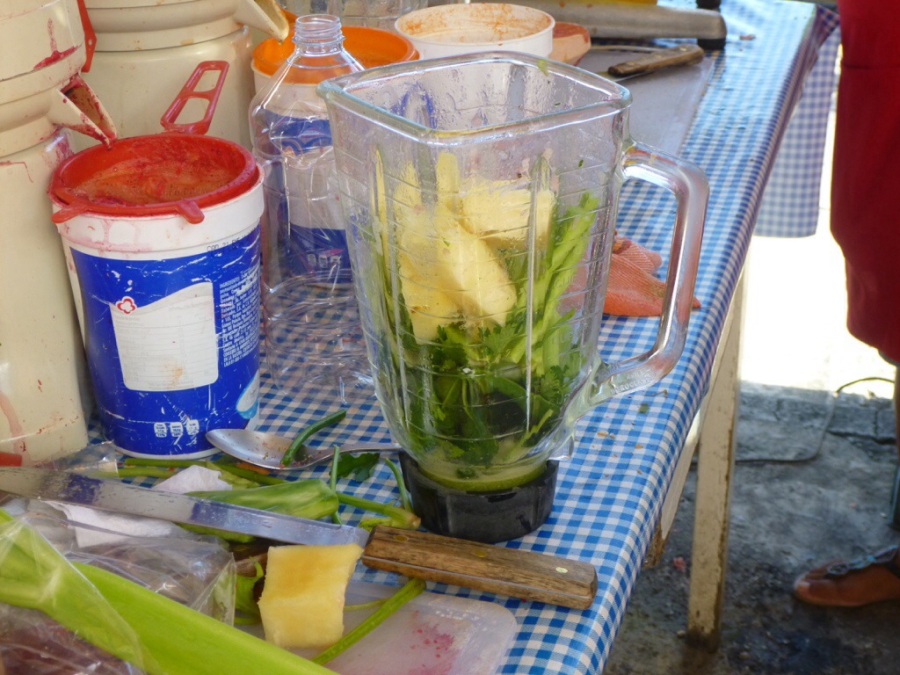 Then I found a hole in the wall called el Rinconcito to eat a homemade, someone’s grandma’s recipe chicken tamale and beef taco. It was not to die for, but it was a good start 🙂 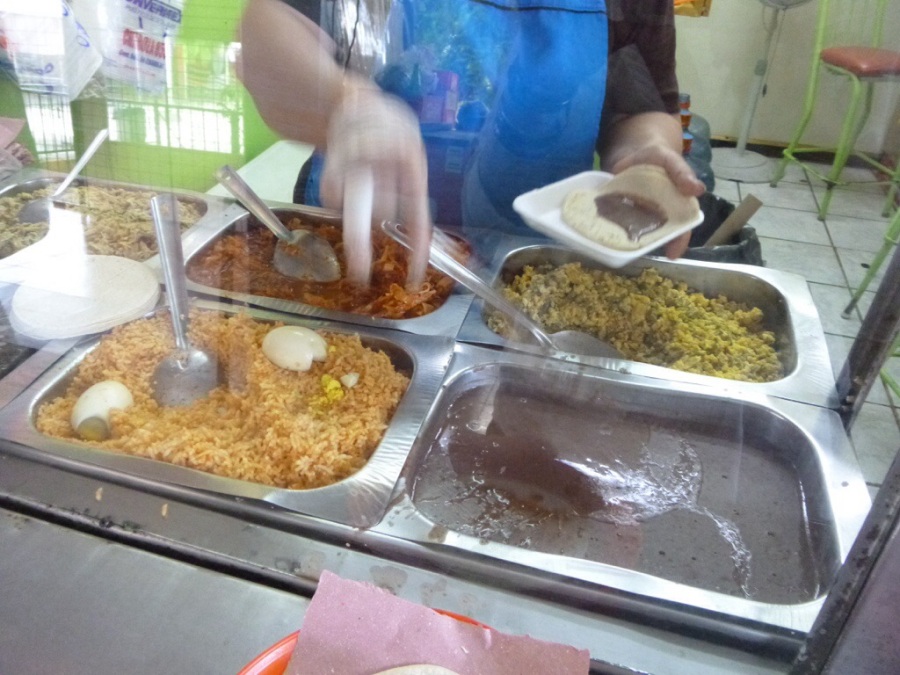 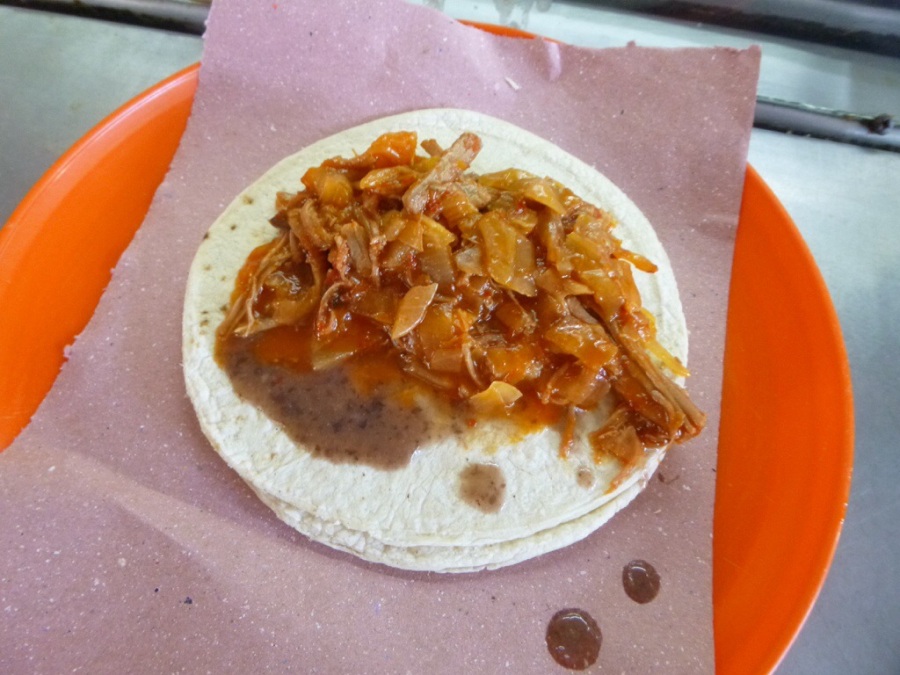 With more time to kill (god, things I would do for a sim card! It got me into full crazy mornings – the start of my latin fix), I stumbled upon a busy stall with friendly owners and boisterous patrons for my second brekkie. Tostadas with pork!! This was to die for!!! I had fun here. Gulped down my tostada in like two seconds! Accompanied by lime and habañero sauce! 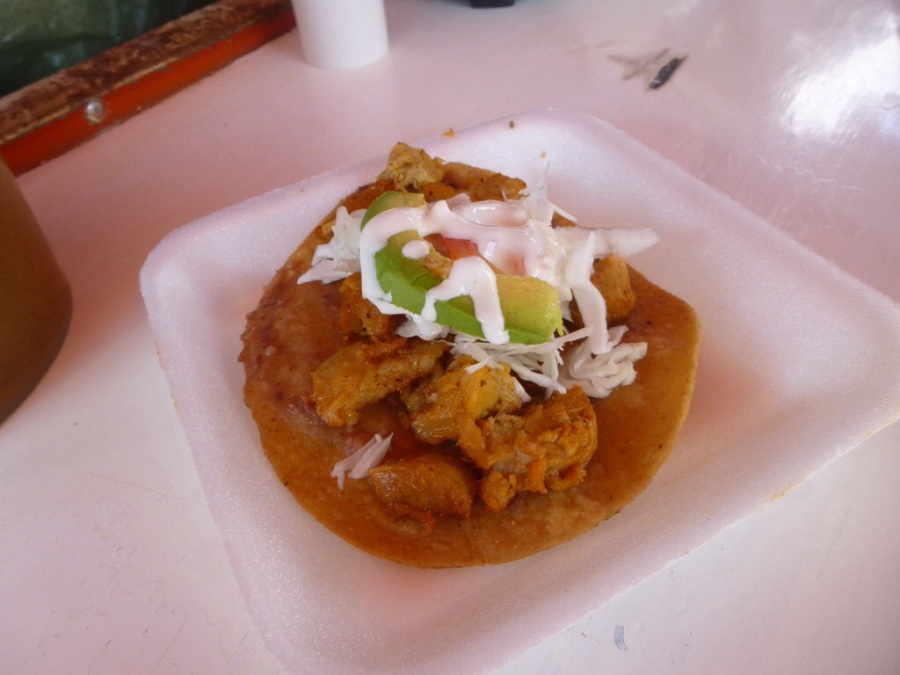 During a taxi ride coming to the market, I spotted a small telcel distributor shop, and upon asking around I was told it opens at 9am. I decided to check it out first and if it works out, I save time to go Isla Mujeres earlier. I thought luck was on my side, but I did not realize what I was getting into some mobile issues…..