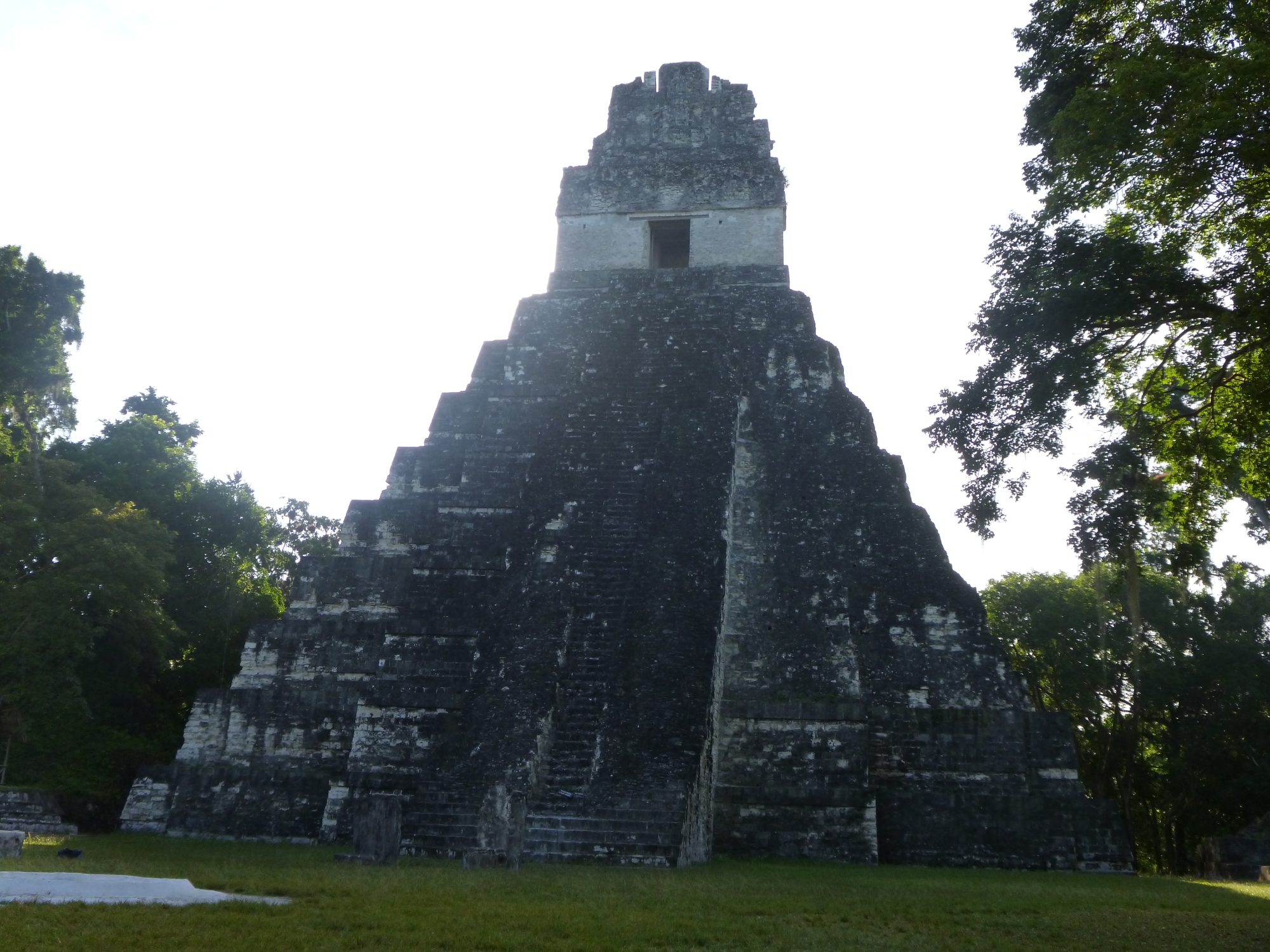 TIKAL….gosh, I do not even know where to begin!!!!

I visited Tikal three times today: right after sunrise, during the day, approaching sunset (when we stayed until dark – we were not supposed to but we stayed behind and no one said a thing). Each visit I went with different objectives in mind and slightly different complexes visited. The main plaza, Gran Plaza is the only one I visited each time and I spent the most time there each trip. I am showing you the photo of Temple I (part of Gran Plaza) at different time of the day. The temple number is the number given by the excavation team. The actual name is Temple of the Great Jaguar. This temple was a tomb for the King, Great Jaguar and riches were found inside during excavation.

I feel today is another successful day of pushing myself a little bit further (which is not the purpose of the trip, but I am just gullible to good marketing and i always want to experience something extraordinary). This guide told me that we could stay back after the park is closed and watch for Milky Way once it got dark.  I get a bit antsy in total darkness, especially outdoors (I did not know how I manage to camp twice in the Incan valley on the way to Macchu Pichu and in Torres del Paine national park, Patagonia, Chile). But somehow I said yes??? Once abandoned, Tikal ruins have been reclaimed by the jungle and they are keeping it as such. 576 sqkm (isn’t that almost as big as Singapore?) has been designated as Tikal National Park and has received UNESCO Patrimonio designation culturally and nature-wise. Being in a jungle, the possibility of encountering wild animals, such as jaguar, exists. During the day, I saw a gray fox. Threat also exists of the human kind, Though no incident has happened recently inside the park (I read in the US State Department travel warning about Guatemala), they do have possibilities of poachers. As a matter of fact, we were escorted by armed guides on the way to Temple IV for the sunrise this morning.

Alas, in the evening, we were (not) so lucky (depends how do you want to look at it – we did do one cool thing as no one else were around). The arm guards left Gran Plaza at 630pm, so Caesar, the guide and I were alone in the Gran Plaza 630pm onwards. I did start to freak out. It was partly the darkness and it was also my imagination run wild. Images from Mel Gibson’s Apocalypse running through my head of people being sacrificed and I was thinking of the number of people who died there up to 1,100 years ago. And plus, they found a tomb under Temple I. The reproduction of the tomb is in a nearby museum. The original items found are in a museum in Guatemala City. Very important: the movie is NOT a representation of Maya culture, by the way. But all in all, it was an evening well spent. We saw the sun sets behind Temple IV (where we saw the sunrise) by sitting at the top temple in North Acropolis (part of Gran Plaza).

But the grand prize is watching Temple I under the stars and the Milky Way (I never saw that before) from Temple II. It would have been a romantic experience 🙂 If taking the beaten path is your cup of tea, message me for the guide’s details. He can be found at the Jaguar Inn hotel in the Tikal National Park. Also, my photos of the Milky Way did not come out well. So you will just have to go see it for yourself.

The sunrise and day trip were amazing also. Both guides were great and both were working out of Tikal Inn where I stayed. Jairo is new and knows a lot. He took us for the sunrise. And he showed us the Lost World, Temple III, Gran Plaza, and complex of the Seven Temples (the most recently completed excavation project). Mundo Perdido (Lost World) has a platform/temple with influences of Teotihuacan (from Mexico) civilization. The observation platform can be climbed, but the pyramid is off limit. A Mexican lady fell and died a few years ago. We saw an allspice tree. Tikal Inn uses this fruit to make pancake syrup according to Jairo. My ears perked up upon hearing this!! Armed with this information, I ordered pancake for breakfast. Jairo was right and the syrup tastes very unique. He said something interesting also as we are observing the flora and fauna of the national park. He said we were standing in the middle of Mayan pharmacy. The complex of Seven Temples share pyramids with Mundo Perdido which are aligned during the winter/summer solstice and the equinoxes in March and September. The Mayans were very big on astronomy and this drove the design of their cities and where buildings were located or faced. One guide mentioned that some archeologists speculate that Temple I to VI is (location wise) to shape like the Big Dipper constellation. This complex also features triple ball courts (still covered by soil).

The tour with Edin in the morning/early afternoon blew me away too. I am glad I decided to pay extra for a private guide. Edin met all my requests and brought me to complexes that are not covered by the group tour (do you now see what I mean by always trying to do things a little bit more?). I got to see Temple of Inscriptions (Temple VI) which is out of the way and the Northern complexes (complex H and P – letters designated by excavation team). He showed me all the corners of the Central Acropolis in Gran Plaza. Amazing!!! He explained to me the different stelaes. Gosh, I had such an amazing time and information overload. Unfortunately, much is still unknown about the Mayan cultures and languages (only 15 percent of glyphs deciphered). Many of the complexes are configured similarly and most pyramids have the same design. Thus, they only restore selective buildings. This comes down to funds, as previously discussed and also Tikal’s Patrimonio status whereby nature must also be conserved as much as possible. They estimate 25,000 structures in Tikal of different size and also newer buildings are constructed over an older one. Their target is to restore up to 25 percent of the complex. Edin also gave me a quick Mayan timeline and also a little bit of their calendar system (very complicated). For those of you who can make it, Dec 21, 2012 (day of winter solstice) will be an interesting time to visit Tikal and see how the new era will come about.

Tikal is definitely a place that I will come back to if I ever return to Guatemala. There is still so much to explore!

One thought on “Magical Tikal”